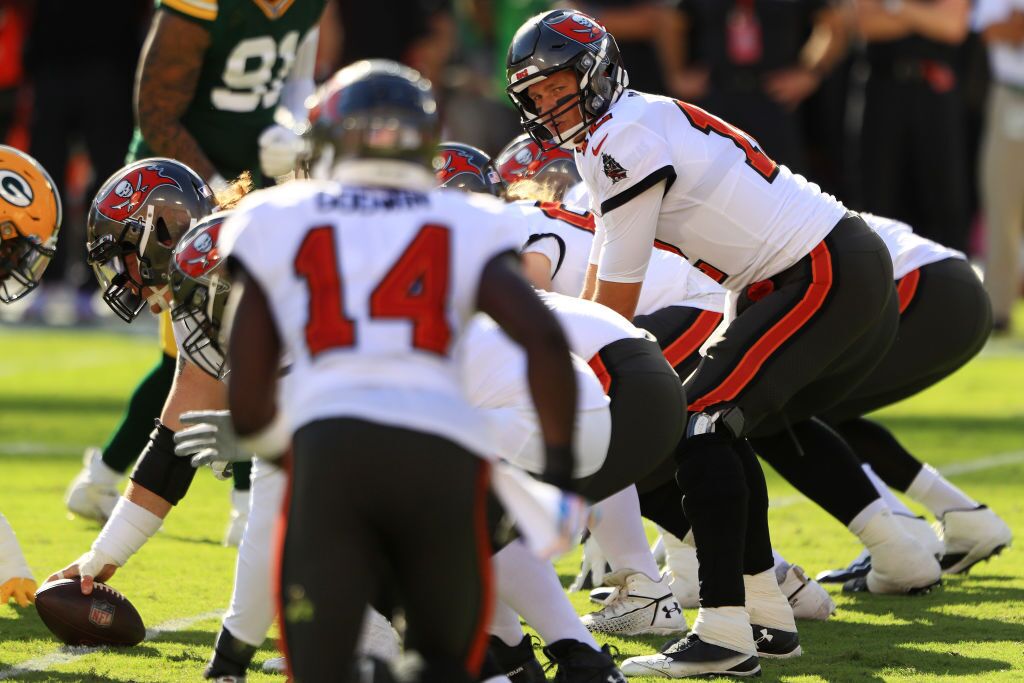 Featured in this article:

After falling behind 10-0, Tom Brady and the Buccaneers scored 38 unanswered points in a 38-10 drubbing of the Green Bay Packers. As +2.5 home dogs, Tampa Bay improved to 3-3 against the spread and 4-2 straight up this season.

The Raiders enjoyed a Week 6 BYE after upsetting the Chiefs in Kansas City, 40-32, the week prior. Las Vegas is 3-2 SU and ATS through five games this year.

Tampa Bay opened and remain a 3-point road favorite at Las Vegas. The Raiders moneyline is somewhere between +125 and +130 if you think Jon Gruden’s squad pulls off its second upset in three weeks. The point total opened at 54, but can be found at 53.5 at several online sportsbooks we track. The total has gone OVER in five consecutive Raiders games.

The total has also gone over in 14 of Tampa Bay’s last 20 games against the AFC West. The Raiders are just 1-4 ATS in their last five home games.

The Packers average 32.4 points per game. The Buccaneers held them to 10.

Green Bay averages 139.4 rush yards per game. The Buccaneers held them to 94.

The Packers average 6.2 yards per play. The Buccaneers held them to 3.3.

What do you think Derek Carr and Raiders offense are thinking after that defensive display?

This isn’t your typical Tampa Bay defense that has been the butt of many jokes over the past decade. Through six games, here is where the Bucs’ defense ranks:

Oh yeah, and the offense just so happens to feature one of the best quarterbacks of all-time, a receiving corps second-to-none, a reinvigorated Rob Gronkowski at tight end and Ronald Jones II at running back who – after eclipsing 100 rushing yards for a third consecutive game – is about to become a household name in his third NFL season.

If I had to sum up, in one word, how the Raiders managed to upset the Chiefs two weeks ago it would definitely be: tempo. Las Vegas controlled the tempo and won time of possession over Kansas City, 35-25. From the jump, the Raiders made a conscience effort to run the football with Josh Jacobs and control the clock. The Raiders finished with 35 carries for 144 yards and converted 50 percent of their third downs to keep the chains and clock moving. We have seen the rabbits Patrick Mahomes can pull out of his hat in less than 60 seconds and why it was so critical to win TOP by 10 minutes. Imagine the outcome of that game if you hand Mahomes and Chiefs hyper-offense five more minutes to rip your heart out.

Don’t be surprised if Jon Gruden implements a similar strategy this week against the Buccaneers. We just saw the Buccaneers score 28 points in the second quarter against the Packers defense. Fair to say the Raiders defense is worse than the Packers. The only difference being that Jacobs won’t be facing the 19th-ranked Chiefs rush defense, but the top defense against the run in the game. Perhaps, some play action pass options for Derek Carr will keep Tampa Bay’s linebackers offense honest. Regardless, the Raiders have their work cut out for them coming out of the BYE.

Betting Pick: Buccaneers -3 and OVER

Tom Brady is great and yadda yadda yadda, but if the Buccaneers defense plays like they did against Aaron Rodgers and the Packers, the Raiders are going to get run out of their billion dollar stadium.

Check out our expert NFL betting guide if you want to learn more about How to Bet on Week 7 of the NFL or head right to our favorite online sportsbook review page and find the right site for you!