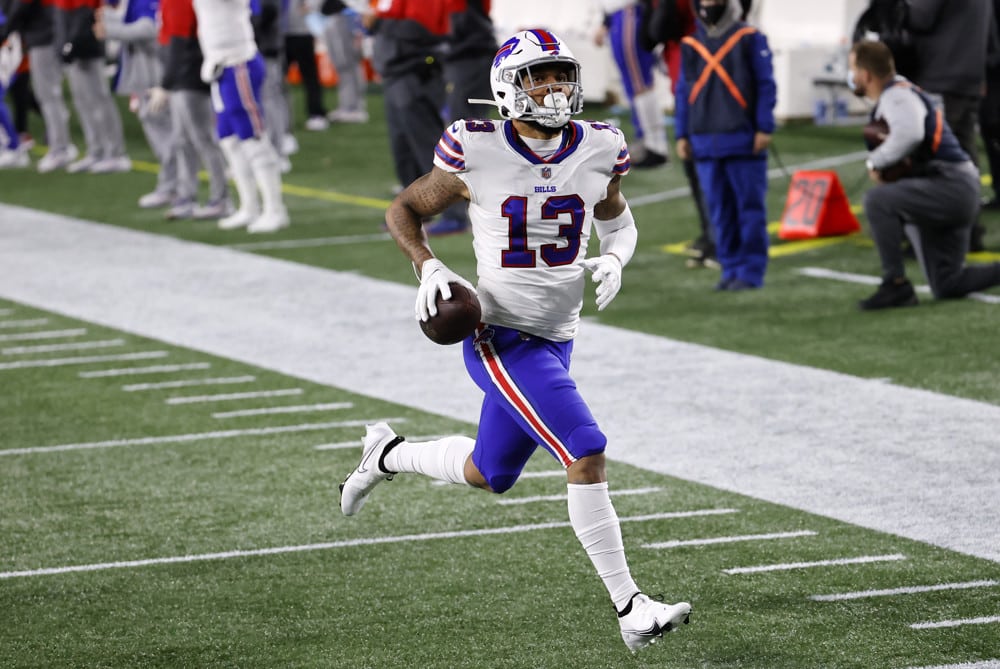 The ink is barely dry as the 2020 Fantasy Football Season is being finalized in the history books. The remnants of your once-promising dynasty team lie smoldering in ruins though. You had such high hopes for that squad and now you are looking at a 2-11 squad wondering where it went wrong. There is hope though! Work the last little bit of the waiver wire and make some smart trades to add some dynasty stashes to your roster.

Sure, this year was old man Philip Rivers’ last ride in the saddle for the Colts. Rivers is likely retiring at the end of the year and Jacoby Brissett is a free agent. Brissett is not the long-term answer for the Colts and there are likely cheaper stop-gap options available in free agency. The unknown, and potential value, in this equation, is Jacob Eason.

Eason was a fourth-round pick in the 2020 draft and at times was regarded as one of the more talented quarterbacks in the 2020 quarterback class. He was a productive passer in college at both Georgia and Washington. It is not easy to bounce between two systems over the course of a college career. The Colts have a bevy of offensive weapons across their offense to support any quarterback. If Eason has grown and learned during a redshirt season and Frank Reich can work his magic, then Eason may be an all-time great quarterback value among dynasty stashes.

KE’SHAWN VAUGHN with the extra effort ?

All the preseason hype was about Ke’Shawn Vaughn as the next great pass catcher in a Tom Brady led offense. He drew comparisons to Danny Woodhead and James White throughout the preseason. Then the Bucs went out and signed LeSean McCoy and Leonard Fournette and let Ronald Jones establish himself as the lead back in Tampa. Both McCoy and Fournette are scheduled for free agency at the end of this season though. With Tampa up against the cap, they will be short on options.

That cap situation will open the door for Vaughn in 2021. In Week 16 with Jones missing due to injury Vaughn finally got the workload everyone thought he could get in the preseason. Was it a massive revelation of the second coming? No. However, he was competent and made the most of his touches. He turned his 16 touches into 69 yards and the Bucs can feel good knowing that they have a capable back to spell Jones in 2021. Jones is most likely the workhorse in 2021, but he is still only at around 41% of the total snaps on the season and never had more than 66% of the work. That leaves plenty of opportunities for Vaughn to see the field in 2021 and makes him a valuable dynasty asset.

There is a 98% chance that Adam Gase will be fired as the New Jersey Jets’ Head Coach this year. That means everyone on the Jets’ roster will be the newest members of the #GaseFreedomWatch in 2021. Whoever the new Jets coach will be will undoubtedly be better than Gase and will have a surprisingly talented offense to work with. Ty Johnson was a late addition to the Jets’ roster, but he has made the most of his repeated opportunities.

Ty Johnson was all by himself ? @T_Johns6 @nyjets

Heading into 2021 the Jets will be in total revamp and rebuild mode. Some of the pieces are not on the roster, but there is a solid offensive core. Ty Johnson is only in his second year and has shown flashes of being an elusive pass-catching option out of the backfield. With a competent coach and a better-constructed offense, he could evolve into a high-level option in PPR leagues. Sure, he may not dominate the touches and the snap count, but he should have flex value so long as the Jets do not add another back.

Speaking of the #GaseFreedomWatch the talented rookie La’Mical Perine could be on track to be the lead dog in 2021. Throughout 2020 he looked like the most talented back for the Jets and generated buzz from the second he was drafted. Injuries and bad coaching robbed him of a more productive 2020 season.

Heading into 2021, it appears to be all but a foregone conclusion that Adam Gase will be out as the Jets’ head coach. Whoever the new coach will be has a surprisingly talented offensive core. Really, between Johnson and Perine in the backfield, you really do not need to go invest more into the running back position. Perine may have only averaged 3.9 yards per touch, but he looked better than the Gase scheme. With so many former Gase players getting out from under him and into new situations and succeeding you have to buy into the #GaseFreedomWatch when it comes to dynasty stashes.

How did Laviska Shenault haul this one in ? @Viska2live @Jaguars

Speaking of new coaches, it looks like Doug Marrone will be fired in Jacksonville. Could not happen to a bigger douche. I digress though, that means that a sneakily talented Jaguars offense will be in a new, and likely better, system. Add in an upgrade at the quarterback position, either Trevor Lawrence or Justin Fields, and you have to like the look of the Jaguars’ 2021 offense. In 2020 there was a bit of hype surrounding Laviska Shenault as an intriguing rookie receiver.

He capitalized on the hype and finished the year second in touches behind only rookie sensation James Robinson. Shenault looked shifty and capable in multiple roles all season. He ended the year with 625 yards on 69 touches and three total touchdowns. In addition to working all over the field as a receiver, the Jags ran some wildcat with him and worked to get him in space as a runner as well. Shenault looks like an elusive runner who can make a big play if you get the ball in his hands. Stash him heading into the 2021 dynasty season.

Watch Josh Allen point at the beginning of the play to confirm the ref was throwing the flag on the offsides, then chucks it deep to Gabe Davis who Moss's the CB

The Bills have been a revelation offensively. With the addition of Stefon Diggs, Josh Allen grew by leaps and bounds in 2020. Buffalo has an embarrassment of riches at the receiver position. However, as a result of nagging injuries to John Brown, Gabriel Davis got a multitude of opportunities to show out in his rookie season. Davis finished second on the Bills in receiving touchdowns in 2020 and looked like a big-bodied big-play option on the outside for the Bills.

Heading into 2021, it is safe to assume John Brown will be healthy. It is not safe to assume he will remain a member of the Bills though. If he is cut next year, he saves the Bills $8.1 million on the cap as they are looking at having to extend players like Josh Allen, Tremaine Edmunds, and Matt Milano. They will be looking to save cap space wherever possible and Davis brings a unique skill set to the Bills offense. While Brown can be a hybrid of Cole Beasley and Diggs, Davis is a unique entity. He is a jump ball receiver who can go up and out-muscle defensive backs. That has helped him lead Buffalo in yards-per-reception with 14.9. Davis will be involved in the Buffalo offense for years to come and he is a great value when it comes to dynasty stashes.

The Saints are a perpetually cap-strapped team and it remains to be seen how this team will look in 2021. Will they be the Ravens South with Taysom Hill? Or will they move on from the soon-to-be 31-year-old Hill for a younger option? Either way, they will also be up against the cap in 2021 and will be looking to save money in any way possible. Callaway is on a rookie deal and those are always helpful to cap-strapped teams.

In 2020 Callaway did not see the field much, but that is most likely a result of the Saints covering for Drew Brees’ arm being shot. Callaway was a big-play threat in college and the Saints do not take many shots downfield as their offense is presently constructed. Heading into 2021, Callaway could carve out a role on the Saints as the big-play threat that Tre’Quan Smith never emerged as. Smith routinely misses time with injuries and has not developed into the player New Orleans hoped he would. Callaway averaged 17.9 yards per catch throughout college and could be a boom-bust type option in the pros. Stash him on your dynasty roster ASAP.

THE ROOKIE Denzel Mims is a playmaker?

This is the last member of the #GaseFreedomWatch2021 on this list. As stated earlier, the Jets flashed offensive potential despite being hamstrung by Adam Gase and Joe Flacco throughout the season. Whether the Jets stick with Sam Darnold or bring in a new quarterback, the offense will be better. In addition to the running backs, Denzel Mims flashed potential in the second half of the 2020 season.

Mims was an absolute target monster whenever he played this season. He had four games with 7+ targets and was on the field for 90% or more of the Jets’ offensive snaps in five games. Despite being a big-bodied receiver, he did not come down with any touchdowns this year. That is more an indictment of Gase and the offense though. If you have a contested-catch receiver like Mims, get him involved around the goal line more than twice. That is right, despite having an anemic offense and having a 6-3 receiver, they only targeted him two times in the red zone. Mims will be more involved in 2021 and is likely to lead all these dynasty stashes in receiving touchdowns next season.

The tight end position has been a massively frustrating wasteland if you do not have Darren Waller, Travis Kelce, or George Kittle. If you can identify a guy with the skills and opportunity to break out then you can hit a home run. In 2020, Harrison Bryant flashed some potential to emerge as a dominant force for years to come as Cleveland’s tight end. The Browns are a run-heavy team that likes to hit play-action passes. That is the kind of offense that can be a boon for tight ends.

Over nine starts in 2020, Bryant has as many touchdowns as Austin Hooper. Additionally, he has played 60% or more of snaps in seven games this season. While he may not have put up the numbers Hooper has, he is still young and growing. He had comparable combine numbers, particularly his shuttle times, to Kittle and Kelce. With clear athleticism and a tight end heavy offense, Bryant has the chance to breakout in 2021.

Raised on the frozen tundra of Canada Minor, Upstate New York, Adam brings the rabid fandom you expect of Buffalo sports fans. He learned to talk sports while tailgating and practiced writing about it at SUNY Brockport. Now transplanted to the semi-South, he brings his rabid fantasy knowledge to Degen Nation as the Talentless Mr. Roto.