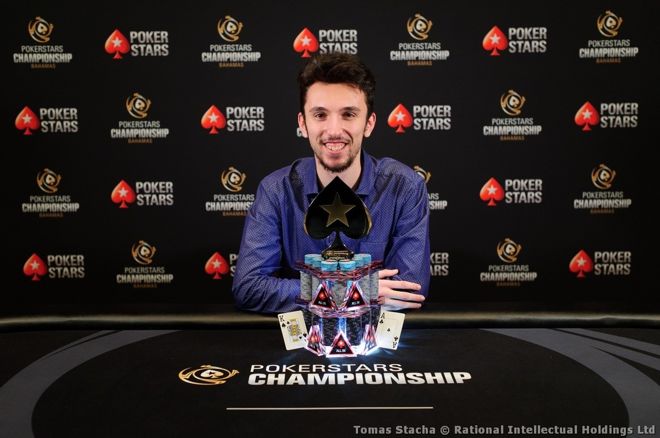 On Sunday night, the first-ever digital European Poker Tour (EPT), the 2020 EPT Online, kicked off its first three of twenty total events. With buyins ranging up all the way to $25,000, this $20M Gtd. festival will be one to watch as the action unfolds between 8 and 18 November at PokerStars.

With cards in two of the three tournaments still in the air, one winner was crowned on Sunday night in the form of David MonkeyBausss” Laka. Representing Georgia (the Asian country, not the US state), Laka outlasted a field of 131 hopefuls to claim the $143,567 top prize in EPT Online 03: $5,200 NLHE [8-Max, High Roller], and therefore became the first-ever EPT Champion in the tour’s rich history.

Keep reading for an extensive overview of all that transpired on the EPT Online‘s opening night.

Follow all the latest from the EPT Online – LIVE!

The PokerNews live reporting team is on top of all things EPT Online. Don’t miss a beat!

After almost six hours, the first PokerStars EPT Online champion has been crowned and it is David “MonkeyBausss” Laka who is going into the history books as the winner of EPT Online 03: $5,200 NLHE [8-Max, High Roller].

Laka claimed the famous EPT trophy and $143,567 when he overcame Pascal “Pass_72” Lefrancois heads-up in a field which attracted 87 unique players and 44 reentries for a total prize pool of $655,000.

Lefrancois was the other player to collect over a ton today to add to his already impressive resume of over $5 million live results. Lefrancois’s cash today comes in his top three of online cashes behind a SCOOP win earlier this year and High Rollers win in 2019.

As expected, the final table was filled with some of the bigger names in the poker world. The other players on the final table included Artem “veeea” Vezhenkov, Vyacheslav “VbV1990” Buldygin, “zufo16”, Jon “apestyles” Van Fleet, and Chris “ImDaNuts” Oliver.

After more than seven and half hours of near non-stop action, the seven-handed final table has been reached and players from seven different countries have a shot at the $188,937 top prize while the top nine finishers locked up a portion of the $700,000 prize pool.

Players from seven different countries remain in contention for the first EPT Online PLO title and in quite remarkable fashion, four of those seven finalists fired the maximum allowed four entries whereas the other three contenders made it through their first and only bullets. Norway’s Andreas “Skjervoy” Torbergsen grabbed the overnight lead with a stack of 1,601,224 after being responsible for the final two eliminations of the night.

Second-placed Rob “batoelrob” Hollink has a long track record of PLO cashes and also won the 2005 EPT Grand Final in Monte-Carlo. The Dutchman burst the money bubble and accumulated 1,371,950, narrowly ahead of Laszlo “omaha4rollz” Bujtas (1,352,317).

Registration for this event is still open, and players can still buy in until the start of Day 2 play. When they resume in Level 16, blinds will be at 6K/12K/1.5K, which means that the 250K starting stack will be worth just over 20 big blinds for the first level of Day 2 play. While the prize pool for EPT Online 01: $1,050 NLHE [Arena Championship] has already surpassed the $1.5 million guarantee with more than $2 million in the kitty, there’s still plenty of time for that to grow even larger.

Both the Arena Championship and PLO High Roller will continue on Monday, while two new events will see the virtual cards being pitched off the deck as well. In addition, the highly-anticipated Mini EPT Online will kick off as well.

Follow along with the dedicated PokerNews EPT Online Hub to stay on top of all things EPT Online.

The Stars Group is a majority shareholder in Oddschecker Global Media, the parent company of PokerNews