Nobody outside the so-called ‘Big Six’ has won the FA Cup since Wigan Athletic’s shock victory over Manchester City in the 2013 final. Worse still, aside from that startling anomaly and Portsmouth’s triumph over Cardiff City in 2008, the ‘Big Six’ have lifted the FA Cup every single year stretching back to 1995.

It is an alarming, and disheartening, situation that was compounded by Manchester City’s 6-0 victory over Watford in the 2019 final: a dark day that reflected the growing chasm between the elite and the rest; between us and them.

Happily, the 2020/21 FA Cup offers a rare opportunity for an outsider to win.

A quick glance at the Premier League table, where just seven points separates first from tenth, confirms this. Covid-19 has created a chaotic and unpredictable division in which fatigue has dramatically increased the chances of an upset.

It follows, then, that the FA Cup will be similarly full of shock results and, perhaps, a surprise winner. After all, the competition is being squeezed into the tightest of spaces this season.

The third round might have its own space, but after that things get messy. The fourth round is on the weekend of January 23, with a full set of Premier League fixtures played the midweek before and the midweek after. The fifth round is to be played entirely on a Tuesday and Wednesday, sandwiched between weekend games, while anyone playing in the quarter-final or semi-final will have their league matches postponed to accommodate the fixture.

Needless to say, an FA Cup run will be exhausting in an already desperately tiring campaign, which should mean the ‘Big Six’ – most of whom are in with a realistic shot of the title and have European football resuming next month – will field a weakened team.

Here’s a look at which clubs outside the elite that could benefit from a uniquely level playing field in the 2020/21 FA Cup:

Carlo Ancelotti would go down as one of the modern greats at Everton if he could win the club’s sixth FA Cup and first since 1995, and there is every reason to believe it is possible. The Toffees have shown resilience against the big teams this season and an ability to adapt to the challenges of the campaign, with Ancelotti switching systems and personnel to overcome the side’s defensive issues.

What’s more, Ancelotti has a reputation as a cup manager. That is largely because he has a knack for picking the right formation and line-up for one-off games but doesn’t provide enough tactical detail to sustain form over an entire campaign. He has previously won the competition with Chelsea in 2010 and has lifted the major domestic trophy in three different countries.

However, aside from a pair of 1-0 wins over Spurs and Chelsea, Everton have struggled against the ‘Big Six’ this season. Everton will rely on an easy draws and the bigger clubs resting key players – but they are also arguably the strongest team in the country among those who will deploy their best players in the FA Cup.

Will Brendan Rodgers take this competition seriously, or does he think Leicester stand a realistic chance of winning the Premier League? They certainly cannot sustain a challenge in both, and given Rodgers played a second string in the Carabao Cup (losing 2-0 to Arsenal in the third round) it may be that the Foxes decide to focus on the league.

Then again, if they beat Stoke City this weekend and get a simple fourth-round fixture, then by the time they reach the fifth round Leicester may not be able to resist the opportunity. Rodgers’ side are particularly good against the ‘Big Six’ sides, too, and with the likes of Jamie Vardy and Marc Albrighton still in the first team they have experience of winning silverware.

On balance, the possibility of a top-four finish should mean Leicester rest their best players for the FA Cup. 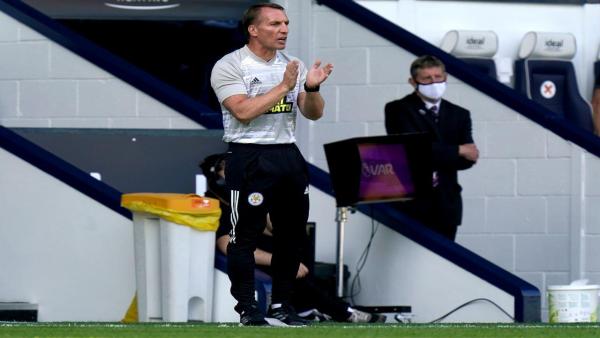 Ralph Hasenhuttl’s tears after his side beat Liverpool 1-0 on Monday night showed just how much success at Southampton means to him. If he was to win the FA Cup he would go down as one of the club’s greatest ever managers – and since Saints are sat mid-table in the Premier League, there is no reason why they won’t go all-in for the competition.

That Liverpool result was proof, as if we needed it, that Southampton’s tactical sophistication (and work rate) makes them a disciplined and organised team capable of beating anyone on their day. Critics will point to their openness at times, a consequence of the club’s high defensive line and aggressive pressing, but they rarely fall short on the big occasions.

Southampton are big-game players, and consequently are very well placed to win one-off FA Cup matches, particularly if those above them in the table play weakened first 11s as the tournament goes on. Saints have a very good shot.

The first obstacle is the biggest, and should define whether Aston Villa can end an excruciating 63-year wait to lift their eighth FA Cup. Dean Smith’s side face Liverpool at Villa Park on Friday with the famous 7-2 obliteration of their opponents fresh in the memory. If Villa win – if Jurgen Klopp plays the kids – then the Villans will be filled with self-belief and ready to take on all challengers in pursuit of the trophy.

Like Southampton and Everton, Villa are likely to fall short of maintaining a Premier League title challenge, which means by the time we get to the fifth round of the FA Cup they might be one of the few top-ten clubs sill fielding their strongest side in the competition. And when that strongest side includes the likes of Jack Grealish, there is every reason to assume victory is possible.

Villa have played at Wembley five times in the last five years, reaching the League Cup final last year and winning the play-offs under Smith the year before. They are good under pressure. But a devilishly difficult third-round tie puts hope of a cup run in doubt.

It is possible that Wolves (25/1) could make headway, given that their strong defensive setup normally means tight games against even the ‘Big Six’ clubs, although Raul Jimenez’s injury has badly unsettled Nuno Esperito Santo’s side.

West Ham (25/1) are riding high in the table, and yet their form against bigger teams isn’t particularly good; it is difficult to see them beating the likes of Everton or Southampton in the competition, let alone the ‘Big Six’. Leeds United (30/1) are neutrals favourites but surely too erratic for cup football.