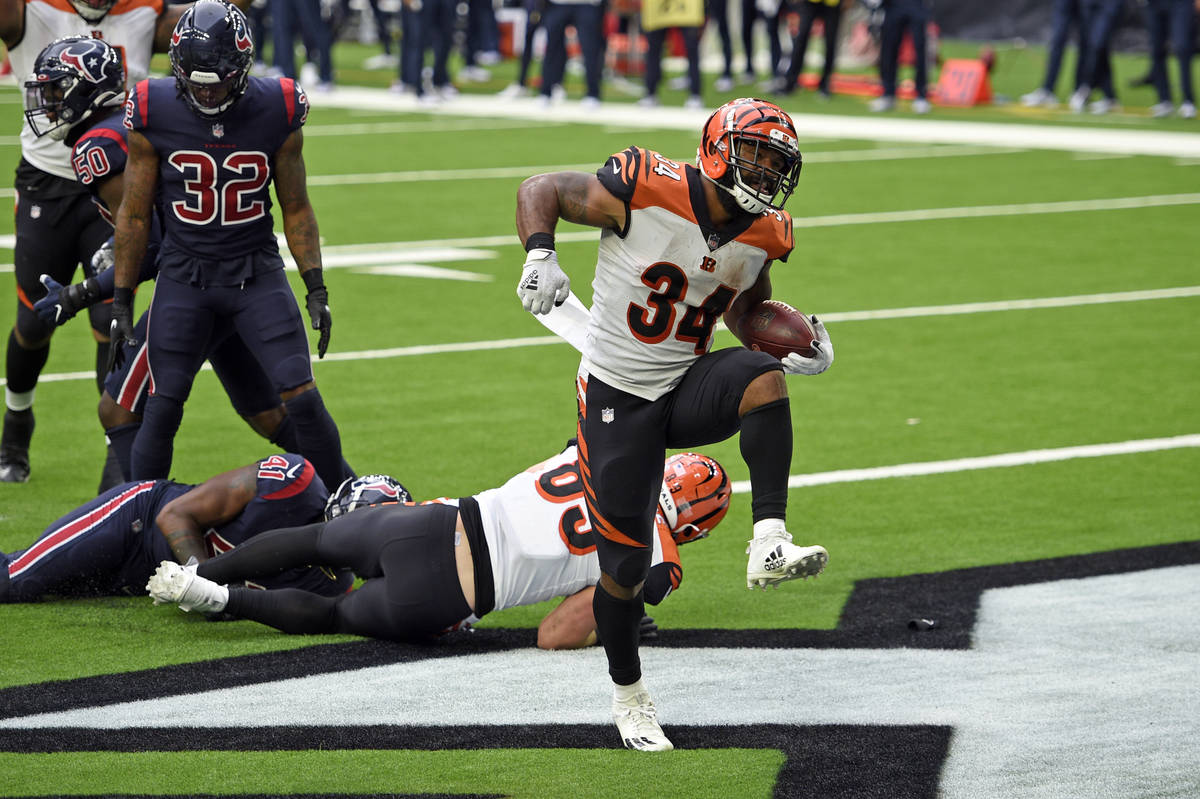 Unless you got Biff Tannen’s “Grays Sports Almanac” for Christmas, you might have had a hard time picking winners on NFL Sunday.

For starters, the lowly Jets and Bengals pulled off outright upsets for the second straight week while the defending Super Bowl champion Chiefs won but didn’t cover for the seventh consecutive week.

Not surprisingly, Las Vegas sportsbooks had a pretty good day.

“Any time you can get the Jets and Bengals to win outright, its usually a good week,” Sunset Station sportsbook director Chuck Esposito said.

The Jets’ victory knocked out 12 Circa Survivor contestants who selected the Browns and the Bengals eliminated five who took the Texans.

The starting field of 1,390 $1,000 entries is down to 35 with one week left. If multiple entries finish 18-0 (including Thanksgiving), they’ll split a $2.39 million prize pool, which includes a $1 million undefeated bonus prize.

Eight contestants had to sweat out Kansas City’s 17-14 comeback win over Atlanta.

The Chiefs improved to 14-1 and clinched the No. 1 seed in the AFC. But they never came close to covering. KC (-11) took the lead on a late touchdown pass from Patrick Mahomes and held on for the win after Younghoe Koo’s 39-yard field goal try went wide right with 14 seconds left.

“Whenever you have the best team in the NFL not covering week in and week out, it’s certainly going to be favorable results for the books,” Westgate sportsbook vice president Jay Kornegay said.

KC was one of the day’s biggest winners for BetMGM.

“It’s not very often that there’s a 14-1 team that’s done well for the books,” MGM Resorts director of trading Jeff Stoneback said. “But everybody is still on the Chiefs and they haven’t been covering.”

Esposito said the Chiefs have become too reliant on their passing game.

“They haven’t been able to run the ball and it’s really changed their offense,” he said. “They’re really become one dimensional and defenses can scheme for a team that’s one dimensional.”

The Cowboys, who have won and covered three straight, were the biggest winner of the day for the books. Dallas (+3) erased an early 14-3 deficit en route to a 37-17 win over the Eagles.

A BetMGM bettor won a $500,000 money-line bet on Carolina that paid $435,000 when the Panthers beat Washington, 20-13. But Stoneback said the book got most of that money back on the Cowboys.

The books had mixed results on the Steelers’ 28-24 comeback win over the Colts in a game that closed at pick ’em. Pittsburgh quarterback Ben Roethlisberger threw three TD passes in less than 11 minutes in the second half and erased a 24-7 deficit.

It was a big win for BetMGM, which took a $220,000 straight bet on Indianapolis. But it was a loss for the Westgate, which took a six-figure bet — its largest of the day — on Pittsburgh.

“Overall, it was a break-even day,” Kornegay said. “It definitely was our lowest volume Sunday of the year for a couple reasons. It was Christmas weekend and it was a lousy card.”

Esposito said the biggest win of the weekend at Station was the 49ers’ 20-12 upset of the Cardinals as 6-point underdogs Saturday after the Saints and Buccaneers covered as favorites in games that went over Friday and Saturday.

“We clearly needed some puppy love,” he said.

The Raiders (+2½) covering in Saturday’s night’s 26-25 loss to the Dolphins was a good result for the books. The game going over the total was a great result for bettors, who pushed the number from 47½ to 51 before it closed at 50½.

The total looked like a dead under at 29 points late in the game. But the teams combined for 22 points in the final 4:01 to bail out over bettors.

“That’s a bad beat for the under players,” Kornegay said.

And a rare bad beat for the books.