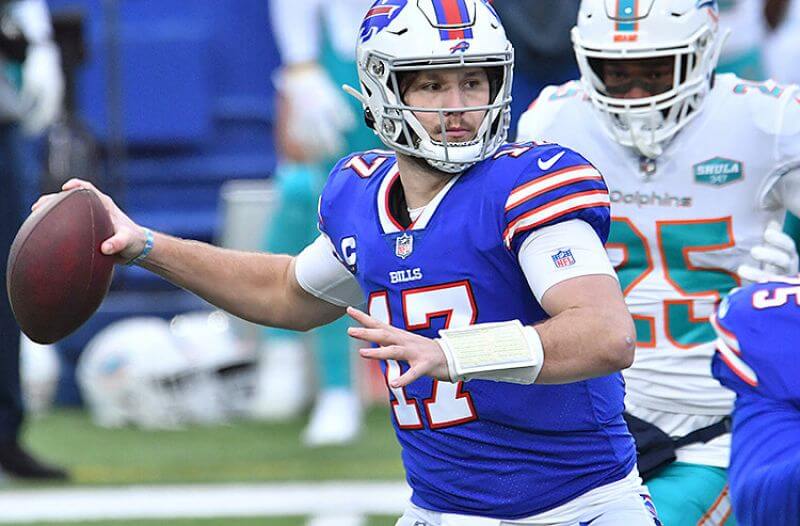 Buffalo is on fire right now, and with the indoor-friendly Indianapolis Colts coming to Orchard Park in January, we suggest you jump on the Bills—NOW.

If you thought regular-season NFL odds were tight, wait until you tangle with the NFL playoff odds. With fewer games on the board, bookies put all their might into making the numbers and adjusting off action on these postseason showdowns.

The first round of point spreads and totals are on the board for the Wild Card games and just like we did every Sunday night during the season, we’re planning out our NFL betting strategy when it comes to getting the best of the playoff numbers.

These are our NFL betting tips for the Wild Card odds to bet now and which ones you should bet later.

The Bills opened just under touchdown favorites at home to the Colts in the Wild Card Round, and money on Buffalo has boosted the juice to -6.5 (-115) at some books. With the way the Bills are playing – and the 56 points they dropped on Miami in Week 17 – you know this spread is going to hit seven—and soon.

Buffalo’s resume for 2020-21 is impressive, with its three losses all explainable blemishes. The Bills whiffed in a weird COVID-complicated Tuesday night matchup with Tennessee in Week 5, lost to the defending champion Kansas City Chiefs on a short week, and fell victim to a 43-yard Hail Mary in a 32-30 loss at Arizona. That’s it.

The Colts are a worthy advisory, having won four of their last five games to finish with 11 victories. But this is an indoor team coming to Orchard Park in January. On top of the limited amount of Bills Mafia being admitted for this game, the weather in Buffalo this weekend is calling for temperatures around freezing. Indianapolis has played in five outdoor games this year, boasting a 2-3 SU and ATS mark.

If you’re betting the Bills, make sure you get them under the touchdown now.

The last time the Browns went to the tournament, Kanye West’s ego was nonexistent and we were getting our first taste of Tobey Maguire as Spider-Man (it tasted like spray tan and burnt rubber). Ah, 2002.

Thanks to the expanded 2021 playoff, Cleveland clashes with a familiar foe in the Wild Card Round. The Browns opened +4 versus the Steelers at most books, but this spread is starting to tick up with a +4.5 out there at -115. This is a dead number and bookies will allow early money to dictate the move, which means if action comes on Pittsburgh – and it will – the adjustment will be fast and furious to +5 or higher.

Cleveland just squeaked past the Steelers’ skeleton crew in Week 17, winning 24-22 as a 10.5-point home favorite. And when you add on a Week 16 loss to the lowly Jets, the Browns aren’t playing their best football heading into the postseason. However, if you’re clamoring to bet Cleveland, hold your horses. This spread is going to go up, barring any injuries/COVID crap. Wait to bet the Browns.

Check back later for totals bets to make now…and later!

Where Can I Get the Best Odds on the NFL?

You can bet on NFL odds at every online and casino sportsbooks, including NFL moneylines, spreads, Over/Under totals and a ton of NFL prop odds. Head over to our best-suggested sportsbooks for the top spots to bet on NFL odds in your area.