The Cleveland Cavaliers have come out on a hot streak to start the 2021 NBA season despite predictions ranking them near the bottom of the league.

How is that possible? Well, it’s all thanks to third-year guard Collin Sexton, who is having a breakout campaign for the Cavs so far.

Sexton scored the ball well for Cleveland last season, but he has already shown strides of improvement this early in the 2020-21 campaign. Sexton averaged 25.8 points on 55.6 percent shooting from the field through his first five games. Moreover, what the Cavs rising star accomplished in his sixth game puts him in some elite company.

Sexton became the fourth player in franchise history to start a season with 20 or more points in the first six games of the season, joining an exclusive club composed of only Austin Carr, Bingo Smith and LeBron James. Against the Atlanta Hawks, the 21-year-old finished with 27 points on 10-of-18 shooting.

Collin Sexton is the first Cavaliers player with 20 points in each of his team’s first 6 games of a season since LeBron James in 2004-05.

Sexton is the 4th Cavaliers player to do this in franchise history, joining LeBron, Austin Carr and Bingo Smith. pic.twitter.com/nB6fr3UoVr

The last Cavs player to accomplish the feat was LeBron in 2004-05, meaning Sexton broke a 16-year drought for the franchise.

The Young Bull has demonstrated that he can be an elite scorer in the NBA. His jump shot has improved dramatically and he’s even became a threat in the pick and roll. If Sexton can cement himself as a consistent 20-point per game player, the Cavs will have their first legitimate scoring option since the departure of James.

Cleveland improved to a 4-2 record after beating the Hawks 96-91, which is of course thanks in large part to Collin Sexton’s offensive effort. He’ll need to keep up his scoring totals if he wants to propel the Cavs into a playoff spot this season. 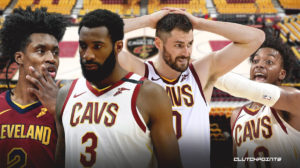