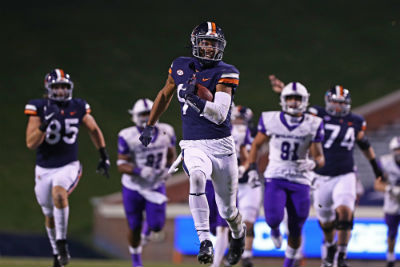 Virginia has won another national title, although this one won’t put some new brass in the Wahoos’ trophy case.

Scott Van Pelt, who hosts ESPN’s Sports Center, and his pal “Stanford Steve” Coughlin, who sits in with SVP on a segment “BAD BEAT$,” have crowned Virginia’s football team as the champion of “BAD BEAT$ 2020.” More than that, Van Pelt declared the bizarre ending of Virginia’s 55-15 win over Abilene Christian and its betting consequenes as the No. 1 “BAD BEAT$” of all-time and said that Virginia has retired the imaginary trophy.

The term “Bad Beat” is a common term among sports bettors, but SVP and Stanford Steve, who is a sports betting analyst have popularized it with their segment, which features moments in sports that cost many gamblers money and a gut-punch when a late score swings the bet.

On a recent segment looking back at the most dramatic “BAD BEAT$” of 2020, Virginia took the crown, not just for the year, but forever according to SVP, who couldn’t contain his laughter over the Cavaliers win over Abilene.

At this point, the sporting public must have been sweating. What happened next sent SVP and Stanford Steve into uncontrolled laughter.

Virginia took the ensuing kickoff and took a knee. From there, well, this is how Stanford Steve described things:

“This features one of the worst plays I’ve ever seen,” Coughlin said. “Here you go people. Have you ever seen 36 (Lindell Stone) throw it to 99 (Keytaon Thompson), then 99 throw it back to 36? Get ready.”

What made the double pass even more unusual is that both UVA quarterbacks were in their own end zone. Abilene sacked Stone for a safety, 49-15, with only 34 seconds remaining in the game.

Abilene got the ball back via safety rules, and so quarterback Peyton Mansell wanted to finish aggressively and with only seven seconds to play, he was picked off at the 16-yard line by UVA’s D’Sean Perry, who raced 84 yards for a touchdown at the final whistle.

55-15, Virginia. Perry’s pick covered the spread and gamblers were either celebrating or jumping off the nearest bridge.

SVP and Coughlin were laughing uncontrollably.

“Oh my god, what has just happened … what have I witnessed,” laughed SVP, who went on to declare it was the best of Bad Beat$ forever. “Retire it.”

Even Virginia coach Bronco Mendenhall had to laugh about the crazy double-pass in the end zone play after the game that November night.

“So, we literally were lining up players at timeouts and having them study the call sheed and have older guys telling younger guys what to do and yell from the sideline,” Mendenhall, explaining the confusion in trying to get everybody in the game.

“Then Robert Anae (offensive coordinator) was off a line (on his play chart). He called in the wrong play at the end. We were trying to run out the clock and we end up getting a double pass called out of our own end zone. So it was a complete accident. It was just like ‘what the crap just happened?,’” Mendenhall said laughingly. “We’re trying to substitute different players in and got off on the script by a line. It shows you what being off one line can do maybe in your life, but also in a football game, where you can go from running out the clock to a double pass. I guess if that didn’t happen then D’Sean Perry doesn’t have a chance to run an interception back for a touchdown. So, yeah, there’s a silver lining and great moment for him.”

Not to mention a silver lining for gamblers to took Virginia to cover the 39.5-point spread.

And a hilarious segment for SVP and Stanford Steve. Maybe Bronco should give SVP a call and ask if there’s a trophy for his office.